Click on a link to jump to that section:

What is visceral fat?

Visceral fat is fat that surrounds the organs, and is associated with numerous diseases. Visceral fat is known to be more of a health risk than other types of fat. It is stored within abdominal cavity, and is located near several vital organs, including the liver, stomach and intestines. Visceral fats seem to be higher in those who smoke and drink regularly. 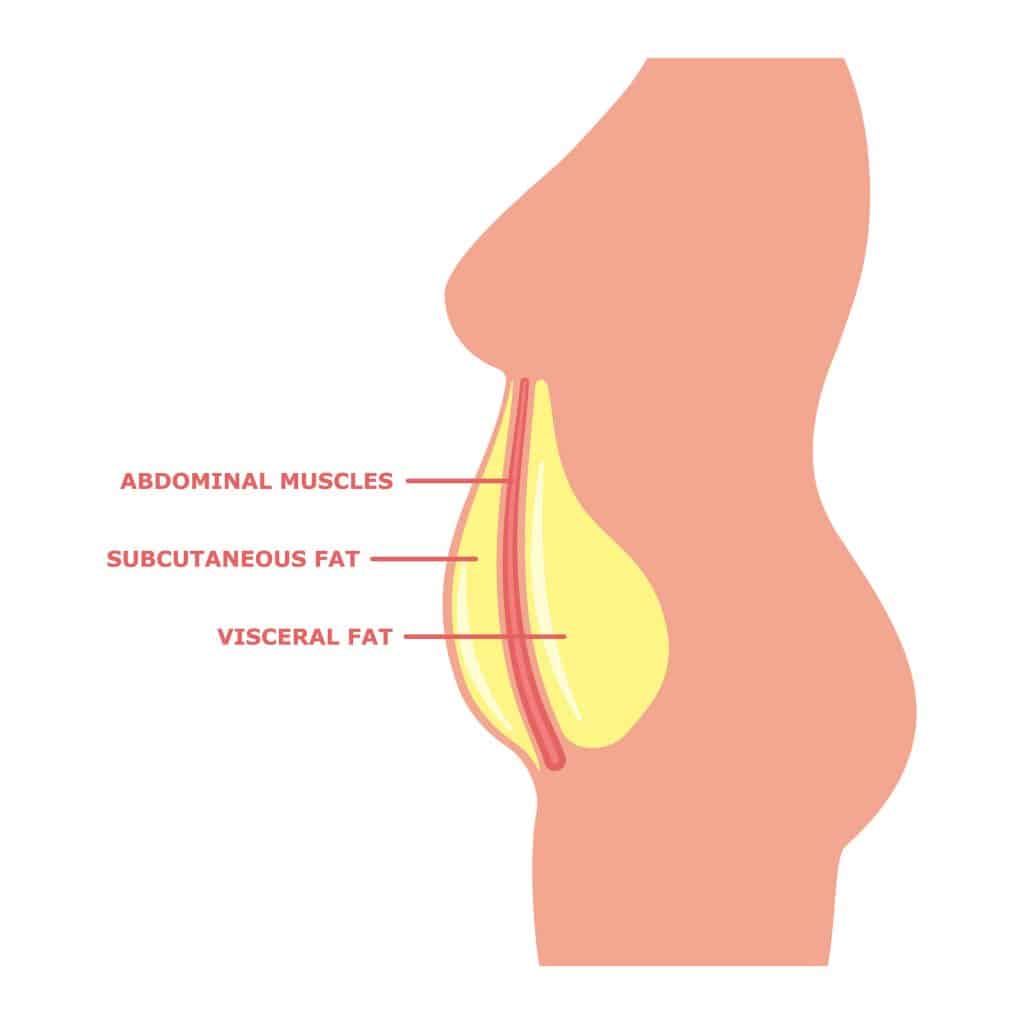 What is subcutaneous fat?

Subcutaneous fat is located between the between the dermis and underlying tissues and organs, in an area just below the skin called the hypodermis. Unlike visceral fat, subcutaneous fat is not associated with many of the obesity related pathologies, such as heart disease, cancer and stroke.

In most people, about 90% of body fat is subcutaneous, On a female’s body, for example, subcutaneous fat is the fat distribution around the hips, buttocks and thighs.

Coolsculpting treats subcutaneous fat, as this is the soft fat that you can pull and grab. 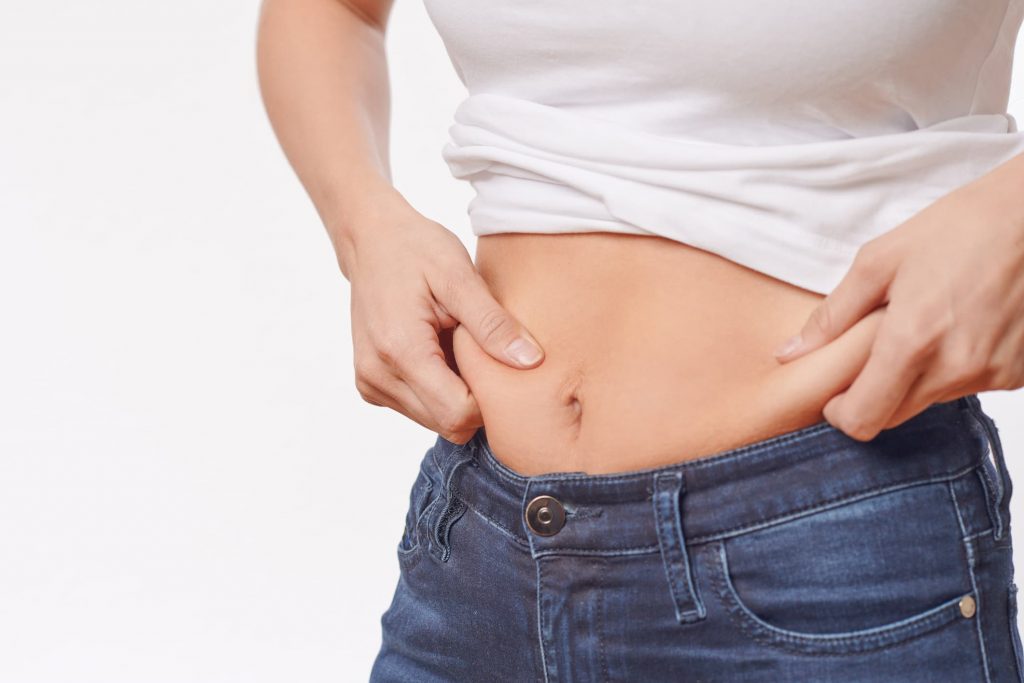 Does CoolSculpting work on visceral fat?

CoolSculpting does not work on visceral fat, as it is located under the abdominal muscles within the abdominal cavity and would not be drawn into the applicator.

When you poke your belly, the fat that feels soft is subcutaneous fat, which is stored under the skin. Subcutaneous fat is easier to see than visceral fat. The visceral fat cannot be seen and is beneath the abdominal wall.

Do I have visceral fat or subcutaneous fat?

If you can pinch the fat that is just under your skin, this means you have excess subcutaneous fat. Visceral fat is stored deeper than normal belly fat. You can’t physically see visceral fat, which is what makes it so dangerous. All of us have a certain amount of visceral fat, however when too much builds up around the organs, this puts you at risk of health complications.

We have an InBody machine in the Clinic which allows us to very easily measure the visceral fat.

What areas of the body can be treated with CoolSculpting?

CoolSculpting requires pockets of pinchable fat, meaning only certain areas can be operated on. Most commonly, CoolSculpting is performed on the belly, thighs, saddle bags, bra fat, back fat, double chin and arms. 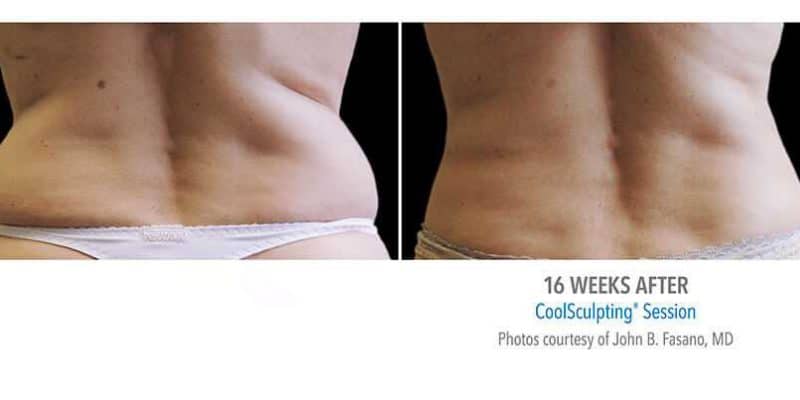 Many women have CoolSculpting done to combat ‘bra fat’. ‘Bra fat’ is a term sometimes used to refer to excess fat that’s pushed both under and over the bra. This overspill of fat can result in bulges which can cause women to be self-conscious about the area.

You can read about more areas that are treated in our guide What areas of the body can CoolSculpting be used on?

Can you be too fat for a CoolSculpting procedure?

To be a good candidate for CoolSculpting, you should ideally have a BMI of under 30 and follow a fairly healthy lifestyle. You should also have pockets of pinchable fat. The best thing to do is to book an appointment with a consultant so they can do an assessment and see if you are a good candidate.

How much fat can CoolSculpting remove?

Coolsculpting removes the number of fat cells in treated areas by up to 25%. CoolSculpting shouldn’t be considered as a weight loss procedure, but a fat reduction procedure that removes areas of stubborn fat.

If you would like to reduce your overall body weight, you should consider changing your diet and exercise habits. We recommend following a healthy, balanced diet and doing regular moderate exercise. If you’re looking to lose larger amounts of fat, it may be beneficial to undergo our medically-led weight loss treatment plan, Mediweight. You can read about Mediweight here.

Coolsculpting technology targets fat cells beneath the skin and reduces the temperature of fat cells in the treatment area to 4 degrees. This triggers fat cell death. The fat cells are then metabolised by the body. Fat cells do not come back once they are destroyed, making it a permanent procedure.

It is important to remember that the CoolSculpting fat reduction procedure is not a weight loss treatment. It is possible to gain weight if you do not keep up your healthy habits. If weight is gained, your body will store it in the remaining fat cells. The area treated with CoolSculpting will not go back to being your body’s storage of stubborn fat.

However, if there is prolonged extreme weight gain, fat cells from adjacent areas may spread to vacant spots caused by treatment.

You can read more about the CoolSculpting process here.

Is CoolSculpting effective for skin elasticity?

Coolsculpting isn’t a skin tightening procedure. However, if the skin in treated areas can appear smoother and firmer, it can appear tighter.

Accent Prime procedure is an approved treatment which targets cellulite, skin tightening and body contouring. You can read more about Accent Prime for the body here.

Do the results of CoolSculpting look natural? 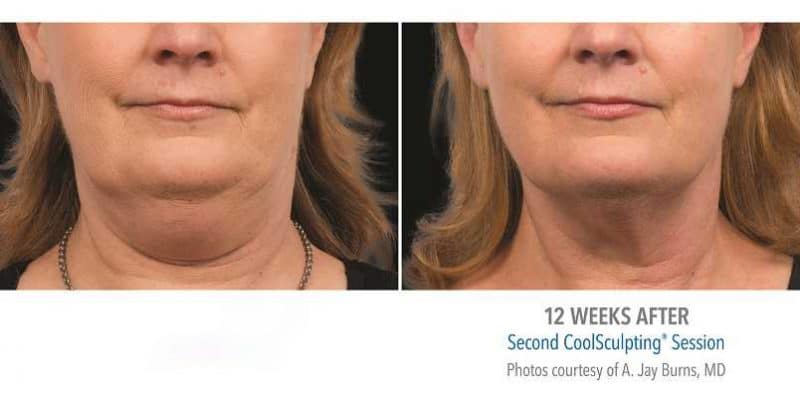 The procedure is not advised for people who are pregnant or breastfeeding. People who have the blood conditions Cryoglobulinaemia or Paraoxysmal Cold Heamoglobinuria are also not ideal candidates for CoolSculpting.

Does CoolSculpting cause bumps or skin dimpling?

The risk of skin dimpling or bumps following CoolSculpting is low, as fat cells are destroyed evenly across a patch of skin.

Does CoolSculpting cause bruising?

Some patients experience bruising following CoolSculpting. This is due to the suction pressure created by the applicator. The treated area will likely be red for 20 minutes following the procedure. If bruising occurs, this will not be a long-term side effect.

We advise against taking pain relievers before the treatment, as this can increase CoolSculpting side effects such as bruising.

You can read more about this process here.

Surgical procedures such as Liposuction, on the other hand, are much more invasive procedures that involves cutting, stitching, and anesthetizing. The Liposuction procedure also often requires local anesthesia, whereas CoolSculpting requires no sedation or anesthesia.