Click on a link to jump to that section:

The process of fat freezing during CoolSculpting 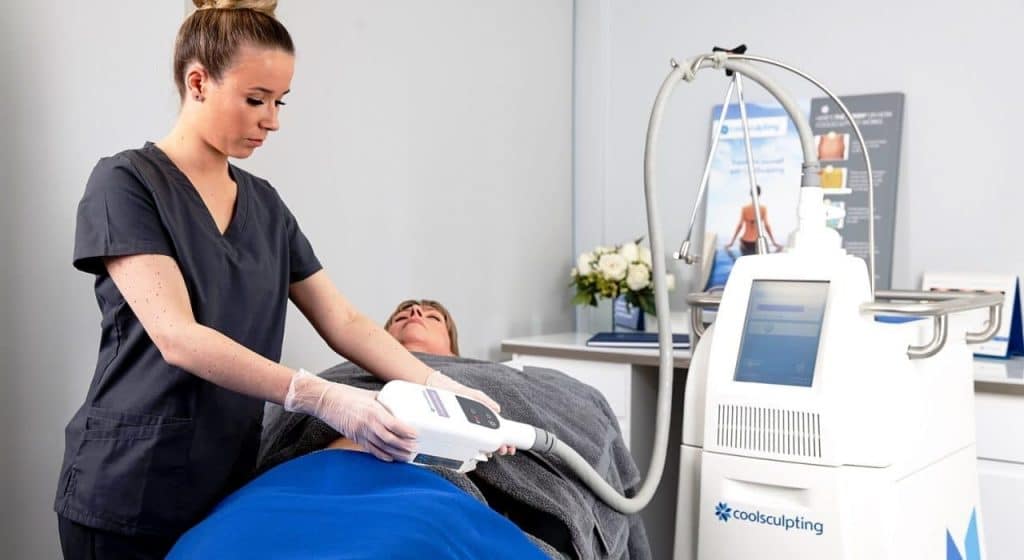 Coolsculpting technology targets fat cells beneath the skin, reducing the temperature of fat cells in the treatment area to 4 degrees. This triggers fat cell death, reducing fat deposits by up to 25%. Over time, your fat cells shrink. They are then naturally metabolized by the liver. As the process is pain-free and fast, this means it is perfect for those unable to shift those last pockets of stubborn fat from their body.

During CoolSculpting, you will be provided with a protective pad. This pad is cold and wet; however, it is entirely painless. The feel of the cold pad can be compared to ultrasound jelly. 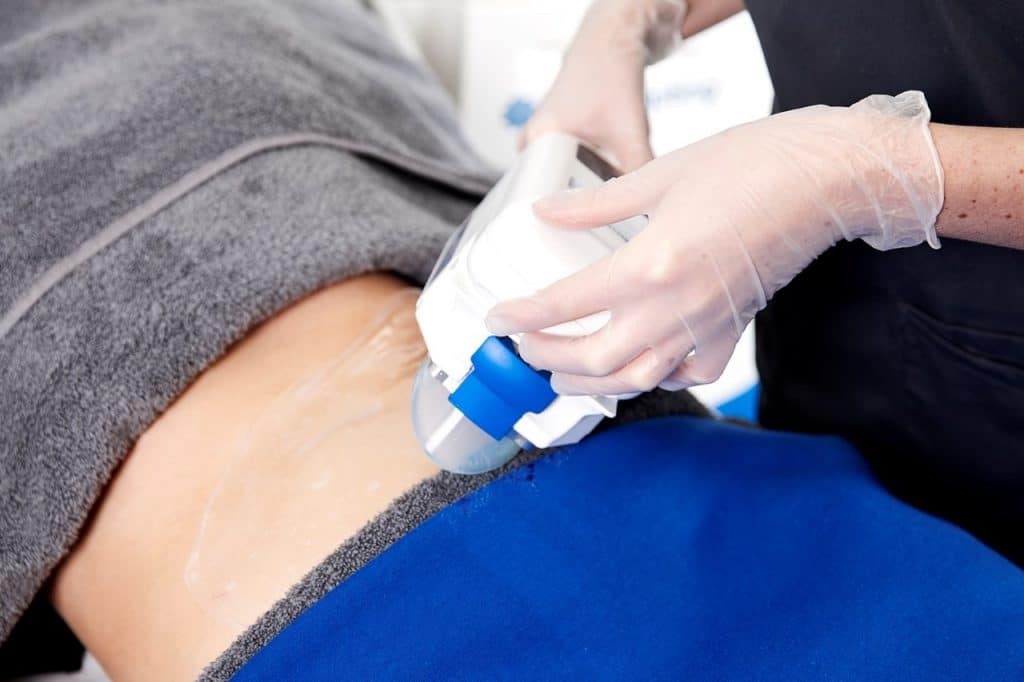 Initially, you may feel intense cold. This is completely normal, and can feel surprising if this is your first time having CoolSculpting. However, this subsides within 5 to 10 minutes as the area becomes numb. The rest of the treatment is much more relaxing, allowing you to even read a book or do work during treatment time.

You can read more about the process of CoolSculpting in our guide CoolSculpting: how does fat leave the body?

Here are some examples of the results of the treated area following the fat freezing process: 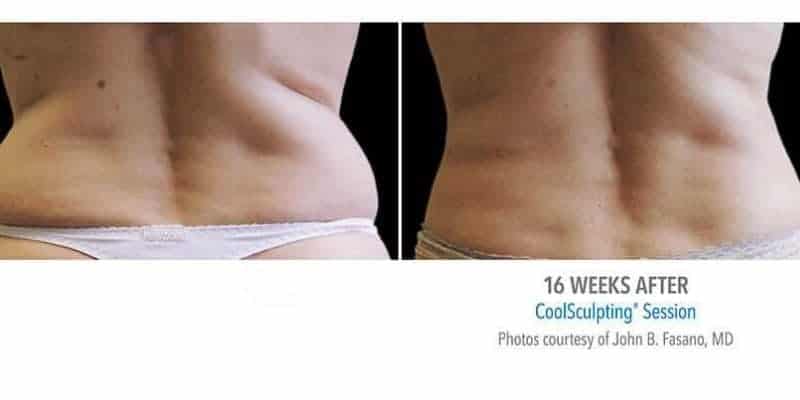 CoolSculpting on back fat- before and after 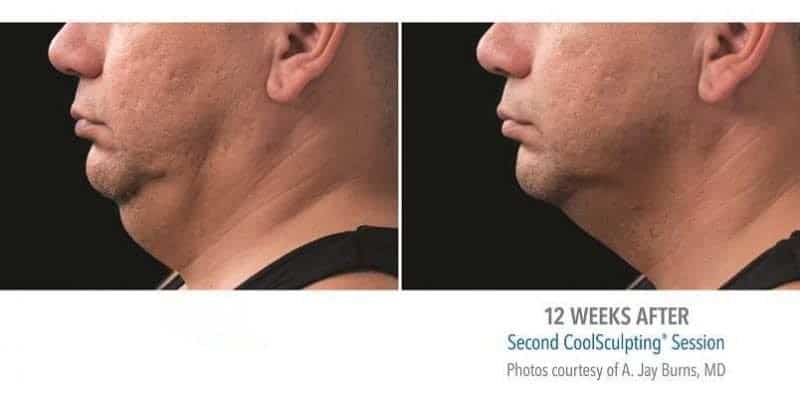 CoolSculpting on chin fat-before and after

CoolSculpting on belly fat- before and after

CoolSculpting is designed for people with healthy lifestyles who are looking to target stubborn fat in a “problem area”. To be an ideal candidate, you should have pockets of pinchable fat and have a BMI of under 30.

Who should not have CoolSculpting?

The procedure is not advised for people who are pregnant or breastfeeding, or who have the blood conditions Cryoglobulinaemia or Paraoxysmal Cold Heamoglobinuria. It is not recommended for people with an unhealthy lifestyle, or have a BMI of over 30.

CoolSculpting is also not ideal if you are looking for a weight loss treatment. If you’re looking to lose more copious amounts of body fat, it may be beneficial to undergo our medically-led weight loss plan, Mediweight. You can read about Mediweight here.

Can CoolSculpting reduce fat on every part of the body?

CoolSculpting can’t reduce fat in every area of the body, only regions that contain pinchable fat.

Certain areas can’t be treated with CoolSculpting for the following reasons:

What areas of the body can CoolSculpting treat?

Most commonly, CoolSculpting is performed on the belly, thighs, saddlebags, bra fat, back fat, double chin and arms. You can read more about the areas that CoolSculpting can and can’t treat in our guide, What areas of the body can CoolSculpting be used on?

If you can pinch the fat that is just under your skin, this means you have excess subcutaneous fat. Visceral fat is stored deeper than normal belly fat. You can read more about the difference between visceral and subcutaneous fat here.

We have an InBody machine in the clinic which allows us to measure visceral fat very quickly.

CoolSculpting is not suitable for people who are pregnant; however, there is no evidence to suggest that it can impact pregnancy itself.

Can I have CoolSculpting done to reduce cellulite?

CoolSculpting is not officially approved to be a treatment for cellulite, and you should not have CoolSculpting done in the hope that it will help cellulite. However, as it removes areas of stubborn fat, it may make some areas look smoother.

Our Accent Prime treatment is ideal for targeting cellulite and tightening the skin.

Coolsculpting is not designed to correct wrinkled skin. If you are worried about wrinkles on the body, you can read about our Accent Prime treatment.

What can you do to maintain your results?

It is recommended to maintain a healthy diet and exercise regularly to maintain your results after CoolSculpting.

What happens if I gain weight in the future?

If you gain weight after the procedure, you will likely never have the same volume of fat in the area of the treated fat cells. However, it is essential to remember that extreme weight gain can cause nearby fat cells to spread into the vacant areas left by CoolSculpting.

Do fat cells grow back after CoolSculpting?

CoolSculpting permanently kills the fat cells in treated areas, meaning they will not grow back.

How does CoolSculpting compare to Liposuction?

Unlike CoolSculpting, Liposuction is a surgical procedure and is a more invasive procedure. During Liposuction, fat is removed via a cannula (a hollow tube) and aspirator (suction device). A small incision is made by the surgeon, and a narrow suction tool called a cannula is used to vacuum fat out of a specific area of your body. CoolSculpting, on the other hand, requires no cutting or stitching.

The table below highlights the key differences between both procedures:

How much does CoolSculpting cost?

At Health and Aesthetics, treatments for CoolSculpting start from £600. Discounts are available on multiple treatments. Finance is available here.

You can read more about the differences between CoolSculpting and Liposuction here.

If you are interested in having CoolSculpting, you can book a consultation here. You can also call us on 01252 905 296 to find out more about CoolSculpting.